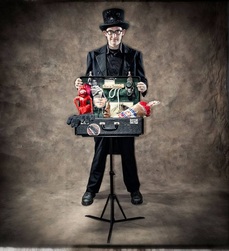 One of magic's most creative magicians, David London, will be performing in New Haven on Saturday March 1st at New Haven's historic Lyric Hall.  The 2:00 pm Family Show is free.   The 8:00 pm Cabaret Show is by purchase.   For more information please visit this event page.

IBM Ring 59 is pleased to sponsor David's performances and delighted to host him for what will be a stunning lecture on Monday March 3rd.   Doors will open at 7:00 and the lecture will begin at 7:30.   Ring 59 members are free, guests are welcome and will be asked to contribute a small fee.  Details forthcoming.  The location will be the Trumbull Public Library, 33 Quality Street, Trumbull, CT.

David London combines magic with storytelling, puppetry, comedy, surrealism, and that which cannot be defined to create original shows of magic unlike you have ever experienced before.

Throughout David’s lecture, you will see, and learn excerpts from David's various theatrical productions including Magic Outside The Box,Cerebral Sorcery and The Adventure to the Imagi Nation. David will move in and out of the performances to teach not only how his effects are accomplished, but also why.

David will also take you behind the scenes to offer insight into his creative process, and discuss character development, and scripting. David will also share some of his one-of-a-kind marketing ideas as well as some close-up effects that he uses in more intimate settings, while existing as a magician in the world.

Through his background and experiences as a performer, author and lecturer, as well as serving as the editor of Beyond The Smoke and Mirrors- A journal devoted to magic and creativity, David has developed a perspective on magic that is entirely his own.

The material he will explore in this lecture has been experienced throughout the United States, and enjoyed by thousands. Don’t miss the opportunity to see David London share his ideas, thoughts and magic. It is guaranteed to be unlike anything you have seen before in magic… or anywhere else! 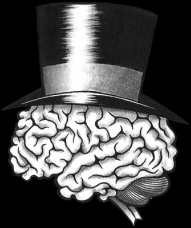 David discovered that he was a magician at the age of seven. In his nearly 25 year quest to understand just what that means, he had created five original theatrical magic productions, including Cerebral Sorcery, …Art of Dreams, and The Imagination Show, as well authored eight manuscripts related to magic and illusion, including Daydreams, Borderland State, and Imagining the Imagination.

David regularly performs his unique style of magic at theaters, museums, galleries, festivals, and private events, and has presented his shows, workshops and lectures across the United States. He has also produced a variety of interactive experiences, including the Midnight Magic Show, Sensorium, The Sunday Circus, Magic Hookah Lounge, Scoposcope, and the Winter Festival of Wonders.

In 2012, David co-founded the Circus of Wonders, which specializes in developing custom circus packages for special events, festivals, as well as theatrical and nightlife experiences. When not on stage, he spends his time writing, making art, inventing things, and exploring the infinite possibilities of the world in which we exist.

Select Cities David has Lectured In:

“A little nonsense now and then is relished by the wisest men (and their audiences). David London is truly the Willy Wonka of magic. His lecture will show you how to make your daydreaming into the most amazing magic.” —Aaron Delong, Double D Lecture Tour

“Rarely does one see on the magic lecture circuit a fresh, entertaining, and thought provoking lecture…In that manner, David London boldly goes where few have gone before… In short, David was a big hit for the Parent Assembly in The Big Apple (New York City)!” —Ken Schwabe, SAM 1, New York City

“During a journey through the magical world of David London, you will encounter theatrics, intelligence, and an engaging on-stage persona. Simply put, it is a voyage that is not only entertaining, but well worth exploring!” — Rick Maue, Deceptions Unlimited

“David London is charging into the 21st century full tilt.  And if he leapt into the 24 1/2 century like Daffy Duck, I would not be surprised.” —Robert E. Neale,  Philosopher and Author

“David begins with the mundane and twists it ever so artfully to reveal its mystery.”-Baltimore City Paper

“London transforms everyday objects into something surreal and unexpected.”-Potomac Gazette

“You make thinking outside the box seem like the only way to think!”-Ruth Knafo Setton, Author, The ZigZag Girl

“Magically innovative and gets brains out of boxes.”-Gerald Haman, Professor of Innovation, Northwestern University

More information on David and his magic at www.MagicOutsideTheBox.com